Skip to main content Our campus is open. See what being on campus looks like this fall.
Blogs - July 30, 2020

‘Hope after hard things’: Meet an Indiana business born from a motorcycle accident

LeAnne Lavender chose to major in business at Grace College in Northeast Indiana because of a google search. Now, she runs her own innovative fundraising platform for MudLOVE, works as a content strategist, and creates influential and inspiring posts on social media under the moniker Lavender’s Longshot. But it wasn’t an easy journey. It was one of hard work, heartache, and long hospital stays.

Derek and LeAnne Lavender of Indianapolis got married three years before Derek’s accident. As newlyweds, they spent their free time renovating their house and posting about it on their blog. On June 15, 2016, Derek was in a motorcycle accident and suffered severe injuries, including paralysis from the chest down. Grateful that he was alive, the Lavenders took it one day at a time as Derek began to recover.

Despite the difficulty, this tragedy led to new opportunities and a greater passion for life. 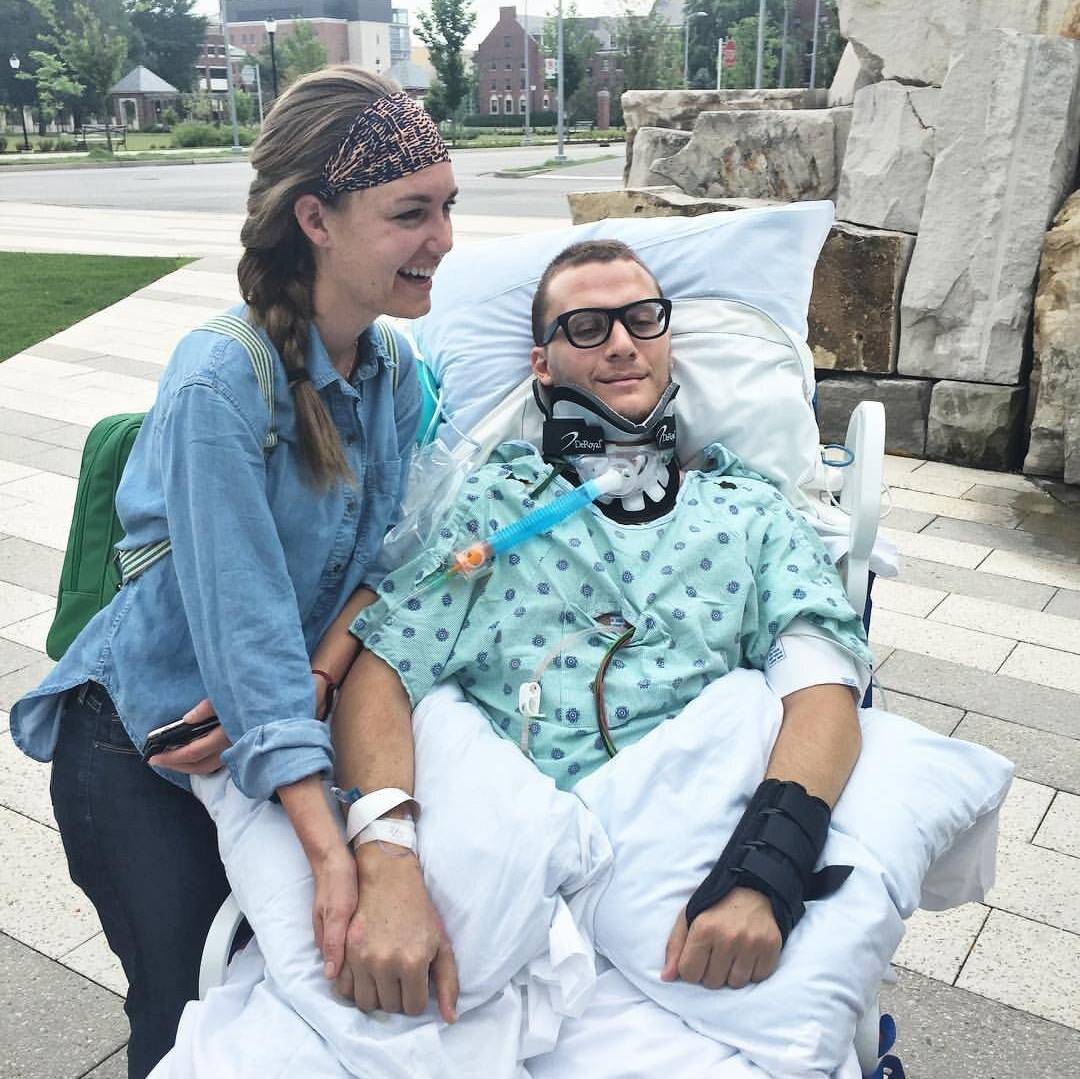 After the accident, LeAnne was approached by Luke Wright, the Founder and CEO of MudLOVE, a Warsaw-based, hand-crafted pottery company dedicated to raising funds and awareness for broken and impoverished communities around the world. Wright asked LeAnne to launch a new branch of the company devoted to fundraising; soon after, LoveWell Fundraising took flight.

“Working with the Lavenders has been a great experience,” Wright says, “The partnership first and foremost is about loving people well through the practical needs of money, and that is followed by great support from LeAnne with fundraising hosts.”

Input Fort Wayne sat down with LeAnne Lavender to learn about Derek’s accident, her passion for fundraising, and where her path has led her today.

IFW: Tell us about your journey from being a student at Grace College to where you are now. What has it taught you?

LL: I am from a really small town, and I went to a public high school with less than 50 students. When I transferred to Grace, the atmosphere was different than anything I had experienced before and the community was a breath of fresh air. I really enjoyed my classes, building friendships, and gaining confidence through independence.

After Derek’s accident, one of my biggest fears was that we would lose friendships or that our community would treat us differently. Instead, I discovered how amazing humans are. We have been nothing but loved and supported since June 15th, 2016.

IFW: Derek’s accident took place a few years after you got married. What was the initial shock of that like?

LL: It was overwhelming. I received a call at seven a.m. from the hospital informing me of the accident and that I need to get to the emergency room as soon as possible. About an hour after arriving at the emergency room, after I got there, the doctors told me it was a spinal cord injury. We didn’t know anyone who was paralyzed, so I felt at a complete loss as to what that meant for our future.

Derek is a T4 paraplegic, which means that he’s paralyzed from the chest down. He has no feeling or movement below his armpits with a less than 5 percent chance of walking again.

But I’m thankful God gifted me with blind optimism, and I thought, “All right. We’re gonna do this. We’re gonna be okay. One step at a time. Pun intended.”

IFW: Tell us more about your experience at the hospital.

LL: After the accident, our whole lives changed. We went from being newlyweds, renovating a house and starting jobs, to living in a hospital, having to sell our home, and not knowing if Derek would be able to work again. And that’s where community came in. We had so much support and love. We were flooded with cards and emails. In fact, we drank free Starbucks for two years from all the gift cards.

We were in the ICU in Indianapolis for a month. The first month was full of surgeries and trying to get him off his feeding tube and ventilator. He then transferred to Shirley Ryan Ability Lab in Chicago, where they taught him wheelchair skills and how to do daily life with a spinal cord injury.

During our three months in Chicago, I was supposed to stay in a Ronald McDonald House a few blocks from the rehabilitation center but an incredible family who learned of our story offered for me to stay in their condo. Having an actual residency meant our family and friends could come to visit. I was never by myself. It was just another way that God showed up. 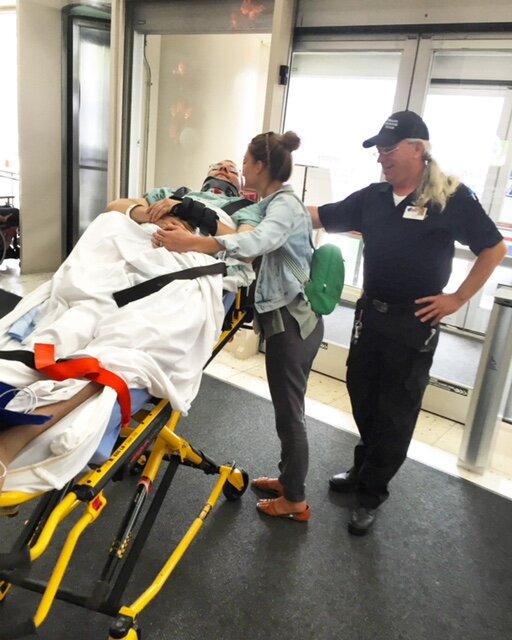 IFW: What was life like for you those three months in rehab?

LL: A lot of it was soaking up all the information I could about Derek’s safety and health. Our house was not accessible at all, so we also needed to find a new place to live.

Through it all, I gained a really deep trust in God. Keeping the mindset of “This isn’t happening to us, it’s happening for us,” has helped us stay out of the victim mentality. We knew some good would come out of our pain.

IFW: How is Derek doing now?

LL: He’s doing great! He’s completely independent and was back to work within a year.

Derek is a very determined person, and I am really proud of how hard he has worked to regain normalcy.

IFW: Tell us about your career in fundraising that came out of the accident.

LL: In September, when we were still in rehab, MudLOVE held a fundraiser for us using their mugs and clay bands. A few months later, I was starting to consider working again when Luke, the owner, reached out and asked if I would be interested in helping them create an online fundraising platform.

I was ecstatic to be using our personal experience to help other families. This turned into LoveWell Fundraising which is a free fundraising platform using MudLOVE bands.

IFW: How have you seen others affected by LoveWell Fundraising?

LL: We’ve worked with families who are experiencing emergency medical bills, adoptions, mission trips, a variety of nonprofits, and more. The beauty of fundraisers is how encouraging they can be when you see your family and friends rallying behind you.

IFW: Can you tell us about your dream of designing homes for accessibility?

LL: When we moved back to Indianapolis, we bought a ranch that needed some accessible renovations. During the process, I really fell in love with the idea of helping those with disabilities feel comfortable in their own home. I’ve had a few clients in the past couple of years, but would love to eventually expand Lavender Accessible Design to help more families. 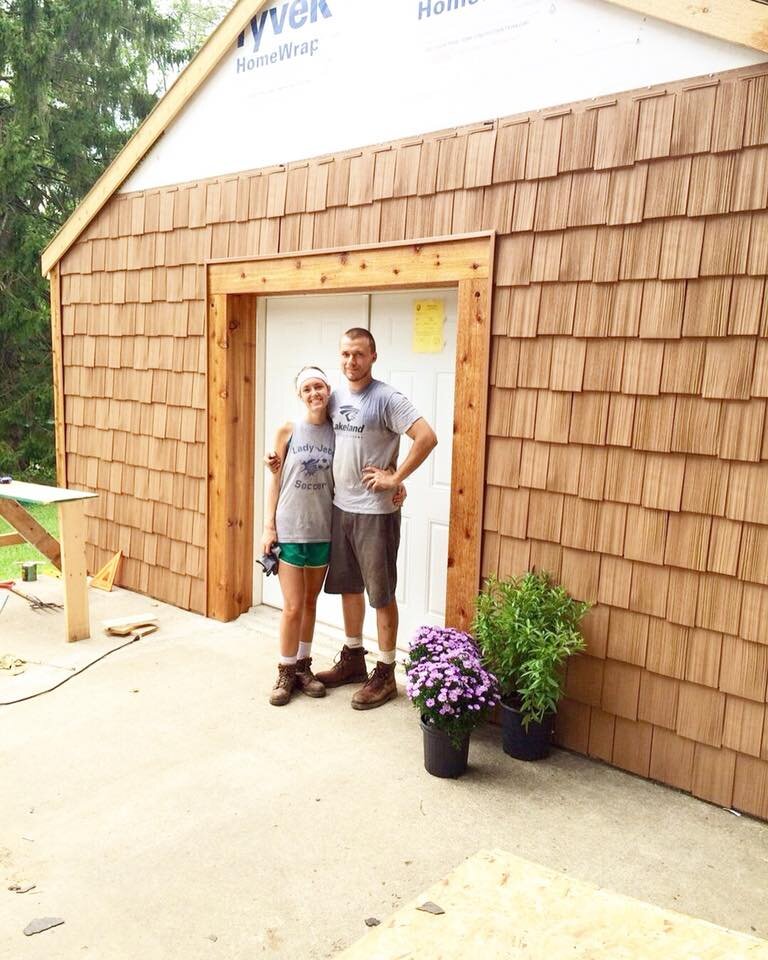 IFW: What have you learned through your journey?

LL: I’m a planner, but have learned the hard lesson that we can’t plan everything out. When I was sitting in the ICU, each day I would wake up with renewed hope even in the unknown. You have to take it one day at a time.

I have to focus on the day at hand because it is not my job to figure out the future. That’s God’s job.

LL: The first few months were really hard, and we were both reeling from the adjustment.

Thankfully, time heals, and the second year was much better than the first. Life just takes more time and planning now. We can’t just run off on a weekend getaway or crash at a friend’s house. Restaurants need to be researched for accessibility and buttons removed on the back of pants.

But we have found a rhythm with our community with hosting game nights, having BBQ’s and exploring our city.
We also have a dog, Barkus Adroolius, who keeps us entertained.

IFW: Tell us about your social media presence.

LL: Our first home was a major fixer-upper, and we named it “Longshot.” I created a blog, Lavenders Longshot and wrote about our renovation journey. When the accident happened, I decided to use the blog to keep people up-to-date on his recovery and how to specifically pray. In the ICU, the posts were very day-to-day as things kept changing. On July 6th, one of the surgeons said it would be a longshot if he ever walked again. And that’s how I decided to keep the name Lavenders Longshot.

We are all members of clubs that we don’t want to be a part of—divorce, infertility, whatever it is; we collect them on this journey. It’s important to find community and to be encouraged that you’re not alone. That’s what I hope my social media can be to others: A space where people can laugh and be encouraged in their daily life.

LeAnne welcomes questions through social media about fundraising, accessibility, and life. You can find her on Instagram and Facebook @lavenderslongshot and on her blog, lavenderslongshot.com.

A Study by Grace College: How COVID-19 is Impacting Local Nonprofits